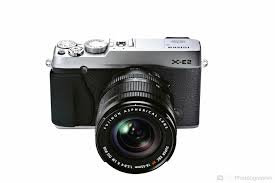 With the release of the new firmware, the X-E2’s electronic viewfinder (EVF) is further improved and now has a lag time of just 0.005 seconds, and is considered by many to be a nearly “Real Time Viewfinder.” The firmware also enhances the frame rate of the viewfinder and the highest frame rate is maintained even in low light conditions or night-time photography, providing smooth live view images through the lens.

In addition to the performance improvements, the new firmware adds:

Selectable colors in Focus Peak Highlight
Users can now select Blue or Red in addition to the original White, to highlight areas of strong contrast. The strength of the color display can be also adjusted between High and Low according to the type of your subject or personal preference.

Added options for Fn (Function) buttons and customizable AE/AF buttons
Users can now assign the “Face Detection” and “EVF/LCD Setting” selection options to two function buttons and two customizable AE/AF buttons in shooting mode. When set to “EVF/LCD Setting,” the button is used to switch between four modes, including “Eye Sensor Mode” (automatically switches the EVF and LCD displays when the user’s eye comes close to the viewfinder), “EVF Only,” “LCD Only” and “EVF Only + Eye Sensor.”

With the addition of the new firmware, the FUJIFILM X-E2 continues on its promise to deliver picture quality that rivals full-frame cameras with high definition image capture, Fujifilm’s legendary color reproduction and category-leading speed.

The new X-E2 firmware is available now and can be downloaded athttp://www.fujifilm.com/support/digital_cameras/software/.