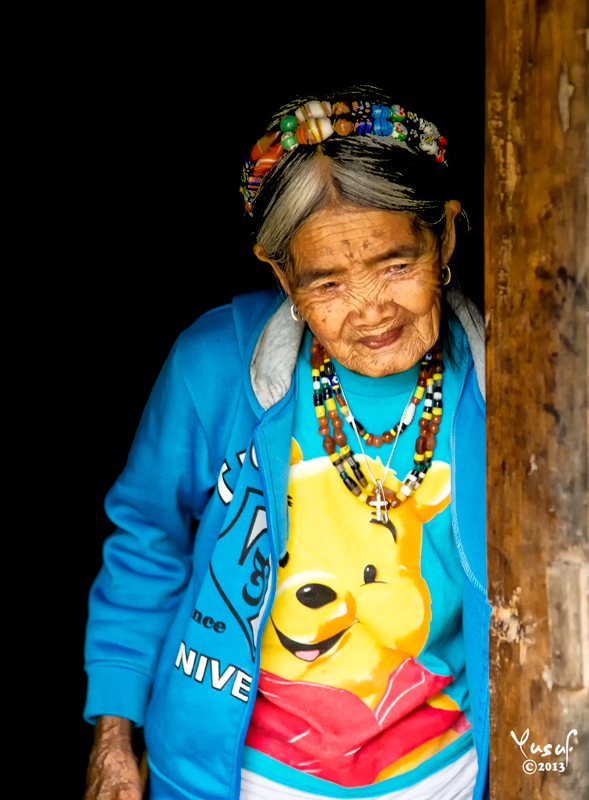 Fang Od is the oldest Mambabatok, or Grand Tattoo Master in the Kalingan village of Buscalan, high in the Cordillera mountains of Northern Luzon

We’ve just returned from a PhotoSafari to the Cordillera Mountains of Luzon, visiting an ancient hill tribe living there, and staying with them in their village. We Brought along medicines for the village, and also donated a large pig for their community feast.

A highlight of our visit was to see 93 years old Fang-od at work. Fang Od is the oldest Mambabatok, or Grand Tattoo Master in the Kalingan village of Buscalan, high in the Cordilleras mountains of Northern Luzon. It was a great privilege to see Fang Od tattooing my good friend Batchoy. To get to her village was not easy. We drove 12 hours direct from Manila Airport to overnight in Banaue, and next day, it was another 12 hours to Sagada, plus another 3 hours deep into the Cordilleras, followed by a 2 hour steep hike in the dark, up to Buscalan, tucked near the summit of a 2500 meters mountain.

Tattoos are a tradition among the people of Kalinga who live in the mountainous Cordillera region. For centuries Kalinga warriors earned breastplate tattoos on their chests after killing an enemy. The lower jaw of the enemy was then nailed to the walls of their houses to serve as hooks for hanging clothes. Kalinga women also had sleeve like tattoos on their arms with designs ranging from snakes, to mountains and their crops. The ink for their tattoos is made from a mixture of water and the residual soot from charred bottoms of pots. The tattoo ink is applied on the skin using two sticks. One has a thorn from a pomelo tree which acts as the needle, while the other stick is used as a hammer to drive the thorn and ink through the skin. The process of tapping the stick with the needle is called pambabatok, which is why traditional tattoo artists like Fang Od are known as mambabatok.

The Kalinga tattoos are traditionally reserved for members of the tribe, but Fang Od was the first traditional tattoo master to break the tradition by agreeing to work on outsiders. In a way this has helped the craft to survive. Fang Od’s tattoos are much sought after with people from all over the world making the tough journey to Buscalan just to get tattooed by her. Fang-od herself has extensive tattoos on her arms, back, torso, and even her face, all made by her father. Fang Od is a spritely 93 years old. She is now training her grand-niece Grace to continue the tradition. Grace has begun to create her own works of ink and art as well. And my good friend Batchoy in the accompanying photo, has one row of tattoos done by Fang Od, and another row below that done by Grace. When Fang Od passes on, Batchoy’s arm is going to be very valuable, with tattoos by both the grand madam and her grand-niece on his arm.