You are invited to join us in yet another unique PhotoSafari Experience. From 18th to 28th October of 2014, we will go on a PhotoSafari to the Old Silk Road, and we will also visit and shoot the amazing Rainbow Mountains of Zhangye Danxia (pic below), in China’s Gansu Province. The Rainbow Mountains, a UNESCO world heritage site, are like a chopped up multi-layered cake of many colours. The unusual colours of the rocks are the result of red sandstone and mineral deposits being laid down, layer upon layer, over millions of years. About 100 million years ago, the Zhangye Danxia Mountains used to be a huge basin with an inland lake. Silt eroded from the surrounding mountains, was carried by water, into the lake. The silt, which contained various ores, was laid layer by layer at the bottom of the lake. Periodically the lake waters dried up, and during those arid periods when the sediment was exposed to the sun and the atmosphere, the layers were oxidized and they changed into different colours. Over time, many layers of many colours were laid at the bottom of the lake.
When the mighty Himalayas were being formed by the Indian Tectonic plate pushing against an unyielding Asian land mass, the region behind the Himalayas were also folded into mountain ranges. Over time, the tops of these mountains were in turn eroded by water, wind and ice. Today, what we see in the Zhangye Danxia region, are the remaining stumps and synclines of previously higher mountains. The ridges, pillars, towers, ravines, valleys and waterfalls, which differ in colour, texture, shape, size and patterns, are an amazing sight to behold and to photograph.

Over the past 5 years, PhotoSafari has taken photographers on several photo trips to Xijiang Uyghur and the Ancient Silk Road. These photo safaris are organized by photographers for photographers. Therefore, each time we go, our participants have returned with exquisite photos, because we not only take you to locations that only photographers know of, but we also share with participants tips and suggestions on how to shoot photos that Wow.
Over the years we have travelled from Turpan down south through the Taklimakan Desert to the Caravanserai city of Kashgar, and then to the Jade trading city of Hotan. Another time we travelled from Urumqi to Turpan, and then around the Northern route of the Taklimakan Desert to Kuche, Aksu and Kashgar finishing up at Lake Karakul near the Pakistani-China border in Xinjiang Uyghur. We’ve even done a PhotoSafari driving from Xining right down to Lhasa near the Tibetan Himalayas.
This time however, our PhotoSafari will start from the eastern end of the Old Silk Road near Xian, which was the ancient capital of China. We will fly into Chengdu and from Chengdu we will take a domestic flight to Lanzhou, the capital city of the Gansu Province, after which we will take a short train ride to Zhangye to see the Amazing Rainbow Mountains
We have chartered a comfortable air-conditioned bus from Zhangye to take us all the way to Urumqi. Along the way we will pass Hami, noted for producing the sweetest melons in China. Then we’ll go to Dunhuang, which is an oasis in the Gobi Desert where we’ll hire camels to go up the Singing Mingsha Dunes. We’ll also visit the mystical Crescent Moon Lake, a beautiful lush green paradise in the burning Gobi desert, where it is said the water in the lake has never dried up. Then we will go to Jiayuguan, the westernmost point of the Great Wall. In ancient times, those staying on the South side of the Jiayuguan pass were in the civilised part of China, while those on the Northern side were said to be barbarians.From Jiayuguan we will go to Turpan and Urumqi where we will end our amazing journey.
Pic Below is an ancient worker digging the Karez water system below ground in Turpan Itinerary
18th Oct 2014 (Saturday)
Fly from Kuala Lumpur to Chengdu.
Free and easy in Chengdu.
For those who haven’t been to the Panda Sanctuary, it’s good to take a look.
Alternatively you can visit the Jinli Old Town to browse the offerings by Craftsmen there
Overnight in Chengdu 19th Oct 2014 (Sunday)
Chengdu-Lanzhou-Zhangye
Fly from Chengdu to Lanzhou.
On arrival, we will visit the Yellow River Park and the White Pagoda.
– Lunch (Lanzhou is famous for its “pull noodles and mutton soup)
– At 3:20 pm, transfer to the railway station for a train ride to Zhangye
– 8:45 pm, arrive a Zhangye and check into hotel
20th October 2014 (Monday)
Zhangye- Jiayuguan
– Breakfast and check out of hotel
– Drive to Danxia Landforms (Rainbow Mountains) UNESCO Heritage Site
– Lunch at local restaurant
– In the late afternoon drive to Jiayuguan (about 3 hours)
– Check in hotel at Jiayuguan
21st October 2014 (Tuesday)
Jiayuguan-Dunhuang
– Jiayuguan is the Western most pass through the Great Wall of China
– After breakfast, visit the morning market, tower gate and the hanging Great Wall.
– Lunch
– After lunch drive to Dunhuang (4.5 hours)
– Will stop along the way for any good shooting opportunities
– Check-in and dinner at Dunhuang
– Visit the night market 22nd October 2014 (Wednesday)
Dunhuang
– Breakfast at hotel
– Visit the Mogao Grottoes (A UNESCO Heritage Site)
– Lunch
– Visit the Mingsha Sand dunes, Crescent Moon Lake and sunset shoot
– You will have a chance to ride the camels through the sand dunes 23rd October 2014 (Thursday)
Dunhuang to Hami
– Breakfast at hotel
– Check out of hotel
– Drive from Dunhuang to Hami (5 hours)
– Will stop along the way for any good shooting opportunities
– Hami is the hometown of the famous hami melon (Pic Below).
– Visit Mausoleum Huiwang, it is also the largest mosque in Hami
– Visit the Monster District in Wubao. It is an Aeolian landform with jagged rocks of grotesque shapes for sunset shoot. 24th October 2014 (Friday)
Hami to Turpan
– Breakfast at hotel
– Check out hotel
– Visit morning market
– Drive to Turpan, stopping to take pictures along the way (5 hours)
– Turpan is the located in a depression and it the lowest point in China at 80 meters below sea level. In Summer, this is the hottest place in China with a recorded temperature of 70 degC.
– Check in hotel
– Visit some street market

25th October 2014 (Saturday)
Turpan, Tuyugou
– Breakfast
– Drive to Tuyugou valley where the ancient Tuyugou Mazha Village of Turpan is located)
– Visit a Uygur village and mosque
– Lunch
– Visit some small villages along the way
– Back to hotel 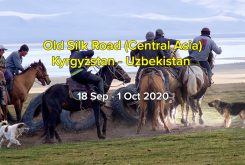