The Spirit of Baikal Lake
Lake Baikal is one of the most attractive natural wonders in Russia. It is especially beautiful in winter. Where else can you see a huge lake not covered with snow? When you step on the ice you feel like you are in outer space, there is a meter of thick clear ice and a kilometre deep of the purest water under your feet.

Incidentally, Lake Baikal is also the oldest, largest, and clearest freshwater lake in the world. In fact, it holds 20% of the world’s fresh water.

Photographers adore Lake Baikal, it has so much to offer. The turquoise coloured crystal clear ice is a sight to behold. There are also the Olhon rocks and a great number of ice grottoes and caves on the way. It is comfortable to travel around the Baikal today –there are comfortable modern lodges with good room facilities and cafes in Olhon. You will drive on a specially equipped ice tracks to ensure the safety of travellers.

Why March? March is the best time to visit Baikal. The ice is frozen and thick. It can bear the weight of vehicles. The ice is transparent and clear and it keeps that way until the end of March. In the beginning of April it begins to brighten up and loses its clearance, becoming matte. In May, it starts the ice starts to thaw.

How to get here?

There is a flight from Kuala Lumpur to Irkutsk Airport with a stop-over at Beijing, Incheon or Bangkok. We are favouring the flight with the shortest travelling time. KUL-BKK-IKT and on return IKT-BKK-KUL. You do not need to get a Chinese Visa by flying through Bangkok. I have screen captured the flight schedules. This schedule may change depending on its availability. We recommend that those who are flying more than 15 hours to arrive a day or two earlier on the 1st or 2nd March at Irkutsk. We can help you arrange the hotel accommodation near the airport to stay for the night and you will be fresh to embark on an eight-hour road journey to Olhon in the morning. Hotel accommodation around the airport is about $60 for a twin sharing room.

Our accommodation at Lake Baikal is at a Lodging House. We have booked a lodging house which caters up to 14 persons. We encourage everyone to stay on a twin sharing basis as we only have 2 single rooms. The lodging house is a two storey building with good heating facilities, 3 toilets and 2 baths. There will be no ensuite toilets here. However, the owner of the Lodging House is the friendliest people you will ever meet in this small settlement.

We will stay in hotels at Irkutsk with modern facilities and rooms with attached baths.

All our meals are prepared by our host at the lodging house. If there are any special requirements, please let us know so that you can ask them to prepare the meals to suit you.

Meals at other places will be at local cafes where you can choose your food preference from the menu.

What is the other equipment that I need to buy?

Clothing – The average temperature in Lake Baikal is around -7deg C. Which means that the temperature can drop as low as -20 degC in some places. Keeping warm is a priority. You can wear layered clothing with at least a waterproof outer layer.

You will need an ultra-wide angle, wide angle and a medium telephoto lens. A sturdy tripod is a must for good landscape photography. We will be giving a briefing on camera equipment when the time comes before our departure.

***All participants must arrive at Irkutsk on or before 10am.

Our journey starts at 10am with the pick-up at Irkutsk Airport. Our cars with our English-speaking guide will be there waiting for you. We will be travelling to the Lake Baikal after that. The journey takes 7-8 hours through the endless Tazheranskaya steppe and by the evening we will reach the ice waterway to Olhon Island. Olhon is a huge rocky island also known as the heart of the Baikal. These are the grottoes of Olhon where the marvellous caves appear. We usually search for such caves before our journey. The accommodation is at the comfortable and neat hotel with room facilities in Olhon. Briefing on the itinerary and safety measures will be done after dinner.

4 Mar: Day 2 (B,L,D)
We start our exploration of the Baikal from the Island of the Small Sea. The capes and grottoes of the Small Sea are incredibly picturesque. The icicles on Oltrec Island are worth seeing. They are called sokui. If Sokui appears it means that winter has commenced and kissed Lake Baikal with its icy lips. From autumn to winter the water-level decreases by half a meter or even more, so intricate ice caves and icicles appear near the islands and on the capes. The strong wind pushes the waves and it splashes water on the rocks. The ice freezes near the shores at first and the waters of the Baikal break with huge splashes upon the coastal ice-floes. We shoot the sunset on Ogoi Island with Buddhist mortar on the very peak. Ogoi has incredibly sharp shore shapes. We shoot it in the reflection of the pure ice of the Baikal at sunset.

5 Mar: Day 3 (B,L,D)
Imagine a beautiful winter fairy tale. There will be Hoboi caves and icy grottoes in it. Breaking waters and splashes frozen on the rocks forming sokui – icy sputters of astonishing forms. Grottoes transform into ice castles on the north side of the cape. This is the place where we will go with you at dawn to watch the first light from one of the icy Hoboi caves.
You can see a woman’s silhouette in the form of the rock that is why the southern Hoboi part is called Maid. Hoboi was named so because of a rock coming into the lake. The rock looks like a tusk (“hoboi” means “tusk” in Buryat). Here and there Hoboi is pierced by through holes evidently from the strong winds. There is a legend connected with this rock. Once upon a time there lived a young couple. A husband was hard-working and did his utmost not only for his family but helped everyone around him. His wife, on the contrary, was an envious and bad woman. She never got enough. So the Gods (spirits of the Baikal) gave the man a palace as a reward for his diligence and his wife was so envious that decided to ask for a palace as well. The Baikal punished her and turned into stone

Today we are shooting the Baikal from a bird’s-eye view above Uzurami. You will see the Northern part of the Baikal not far away from the cape Hoboi again. From high above there is a wonderful and splendid view to the Barguzinsky mountain range and to Olhon (the Baikal is 70-100 km in width here).

The rocks close to Uzur are worth painting. Red and yellow flames look like as if it is rising into the sky above the huge ice blocks. After morning’s shooting, we go down to the ice to shoot Uzur rocks.

In the evening, we have a shooting not far away from our hotel, on Burhan point.
Burhan point was historically named so probably because of the locals’ traditions to sacrifice to Buryat spirits in the rock’s cave. Moreover, there was shamans’ burial place there. The rock itself is located in the West of Shamanka, it’s 3 meters height and a long narrow passage goes through the rock in the East. Nowadays the cape is often called Burhan. “Burhan” is the word that Buryat Buddhists call the Baikal tribal God. “Bur” is another name for Buddha. In old days there was a Buddhist chapel in this Shamans’ cave. There were a lot of statues of Buddhist gods, icons, incense sticks and different things for sacrifices inside of this cave.

7 Mar: Day 5 (B,L,D)
With the first rays of the morning sun, we shoot Olhon ice grottoes. In the afternoon, we will have a photo review session and give pointers on how to achieve a better shot. In the evening we go shooting to the Small Sea close to the picturesque Baikal islands.

8 Mar: Day 6 (B,L,D)
Morning shooting at the island Ogoy. Today we will venture along the coastline and Islands of the Small Sea. In the afternoon we will visit small Buryat village and take part in the Buryat national feast. Buryat village is a unique village built in the Buryat tradition. Most of the inhabitants still wear traditional costumes. Evening shoot on the Shaman Rock or in the caves of the Small Sea

9 Mar: Day 7 (B,L,D)
Today we have a reserve day for the weather. Morning shooting depends on the weather and condition of the ice. In the afternoon it is free and easy. You can take this opportunity to walk through Khuzhir and do some last minute shopping for souvenirs. Be sure to stop at the best cafes on the island and taste dishes of the Buryat national cuisine. We have arranged our farewell dinner for tonight. All good things must come to an end. After that a bus will pick us up, and by midnight we’ll be in Irkutsk. We will stay at the hotel close to airport. Our unforgettable journey to Baikal lake is over. See you soon, friends.

Depart for home. In the early morning transfer to the airport. (Airport transfer is included). Driving on top of the frozen lake Crystal clear ice on the lake 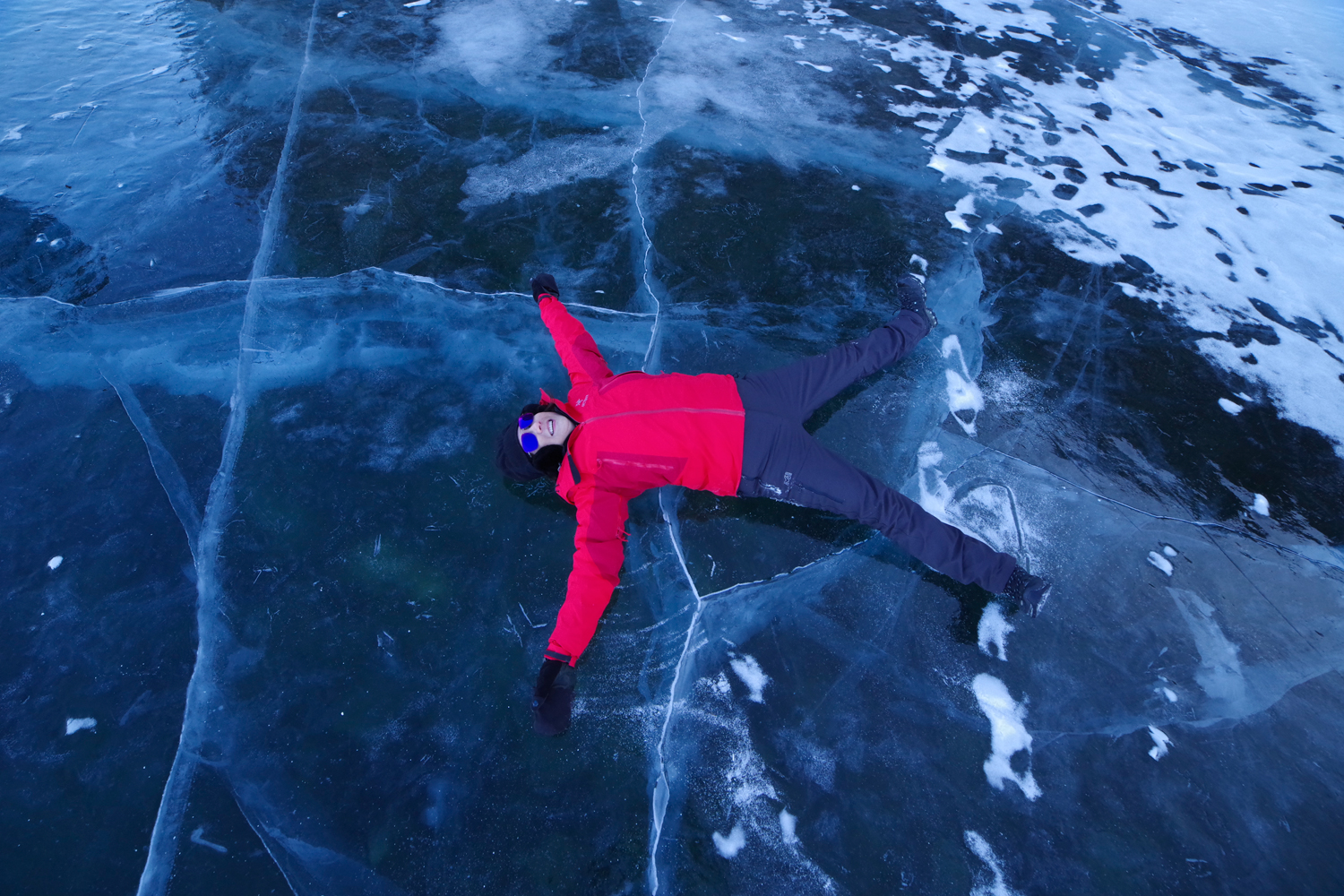