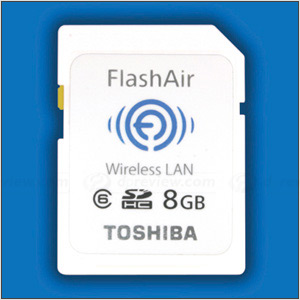 Toshiba has announced a WiFi SDHC card that can both transmit and receive data. It’s the first card to fully comply with the SD standard, the company says. It also claims lower power consumption than ‘other cards with similar functions,’ by which you have to assume it means Eye-Fi. The card will be able to share data with compatible cameras, smartphones and WiFi-enabled computers. All cameras with SD slots will be able to broadcast data from the card, and Toshiba says a number of camera makers are considering launching compatible products that will allow data to be received, too.