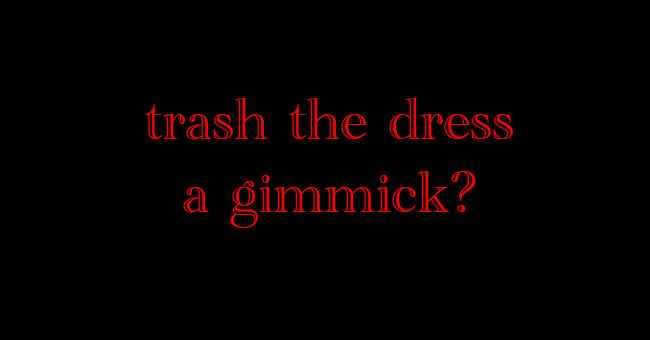 In wedding photography, the “Trash the Dress” trend has veered increasingly toward shock-and-awe novelty, rather than artistry. The phenomenon all too often leaves me feeling squeamish.

You know the drill: A beautiful bride in her lovely white dress gets convinced by a well-meaning photographer to trash her gorgeous gown for art’s sake. She ends up with food dumped on her head or is induced to take part in a mud-wrestling match. Whatever the scenario, her once-pristine gown is not only soiled, but irrevocably besmirched. The images, for the moment, might strike viewers as edgy because of the stark contrast between purity and perversion. Fast-forward 10 years into the not-so-distant future: You will find something amiss.

The current slippery slope of “Trashing the Dress” has lately become an empty gimmick and might even be an utter disservice to a wedding photographer’s clients. It first really exploded in the mid-2000s. At first, I even found it intriguing. It didn’t take long, however, until I grew entirely fed-up and disenchanted with the majority of the movement’s output. Images with no real content, no discernible message, and no artistic vision are not tolerated in our cutthroat and competitive industry but, somehow, trashing-the-dress has gotten off scot-free for far too long.

Some wedding photographers, no matter how well-intentioned, are relying not on genuine creativity, but instead a clever “hook.” Rather than an image that uniquely and originally reflects the true essence of a bride’s character and personal history, she ends up posing for a pre-fabricated rendering that has nothing to do with her. Just because something is “gritty” doesn’t make it art.

I do not advocate outright banishment of the trashing-the-dress trend, but I am making a stand against rash artistic impulses that are not thought-through to their fullest completion.  I understand that there is some great photography that illustrates this theme, but as a whole have not found this to be the norm.

What about you? What is your opinion about Trash-the-Dress shoots?