A couple of years ago I did a Ricoh GRD III hands-on review. I was excited when I was offered an opportunity to take the GRD IV for a spin on the 10 days trek from Besi Sahar to Manang in Nepal a couple of weeks ago. On inspection, the camera looks and feels the same, like the GRDIII. Nothing much has changed. The controls were where they were in the previous model. So what were the improvements?

Nothing much has changed in the design department. If one looks at the 1st GRD introduce some time back in 2007 and the 4th generation, the first thing that struck was, “hey” they all looked the same. Some photographers maybe bored by the design, it does not inspire or tip the bar over for impulsive purchasers.

So has the design of Oskar Barrack’s Leica M. Nothing much has changed since the introduction of the 1st Leica M3 in 1953. In fact, Leica were going retro with their MP. Is this trend a good thing? Well, if you have a right formula, don’t change it. In fact, Fuji has successfully launched the Fuji X100 on similar design lines like the Leica M and the purchasers loved it.

The fact that Ricoh did not changed the design form much since the days of the Ricoh GR film cameras, meant that they were concentrating on the quality of the images rather than cosmetics.

As a consolation to answer some of their critiques, the Ricoh GRD IV came out with the “white” version of the GRD IV. I was told that this model was currently out of stock.

Now I wished that Rollei would come out with a digital compact that looked like their iconic Rollei 35. I think the market would rush for it. Ricoh GRD design thru the years 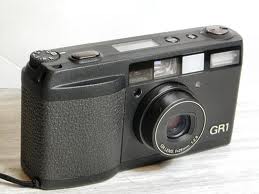 Leica and now Ricoh have preached the “zen” of photography. It is minimalist and simple instruments that work with the soul. My Leica M3 only has 7 moveable adjustments on the camera and that included the lock on the bottom plate. It did not even have a light meter. It forced me to feel and get involved with the environment. Feel the light as it lit up the subject and predict the exposure value.

The current Nikon D4 by comparison has 27 buttons and that does not include the battery and CF card compartment.

Ricoh in its own way also followed the similar philosophy. It’s simple menu and dials are just intuitive. It featured a very sharp fixed 28mm (35mm equivalent) f1.9 lens. As a camera it is capable of producing very high quality images that is second to none in a compact camera. No wonder, Leica Owners would also own a GRD as their alternative fun camera. How do the improvements translate to real shooting situations?

The first thing was the improved ISO settings – it works. I could get quite clean shots at ISO800 as compared to the ISO400 on the previous model. If I couple the higher ISO capability with the image stabiliser, I could get about 3 stops advantage over the previous model, which is very significant especially when shooting in low light situations.

The auto focusing works well in low light conditions. I shot a few shots in the kitchen lit only by the light from the burning firewood.

The battery life did improve but not that significantly. I could get about 300+ shots per charge. However, the camera was used under temperatures of about 1 to 5 0C.

The feedback from the LCD screen was really good. Most of the PMPE participants were impressed by what they saw on the LCD screen.

The sharpness and beautiful colours from the CCD sensor were a given. I liked the in-camera BnW conversions. This is the 2nd best BnW in camera conversions I have seen, the best was the Leica M9. I was very impressed by the capabilities of this little camera. I was able to capture lasting memories of an unforgettable journey with it.

I had to switch back to the same workflow as when I was shooting with a Leica. It was a refreshing move. Sometimes I wished, the designers would design a neck strap rather than a hand strap. It would be fun hanging the camera around the neck especially with the “white” model.

It is a good street camera. It can be paired with a Leica seamlessly in terms of workflow.  The fact that this camera is pocketable and light weight, it gets taken to places all the time. Pine cones on the Manang trek On the Manang Trek