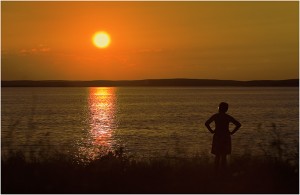 I see a lot of flat, uninteresting snapshots in PhotoMalaysia which their owners call a sunset, and with whatever little I know, I’ve often tried to make some constructive comments directed especially to newbies. The following are some thoughts which I hope newbies will find useful.

When shooting sunrises and sunsets, your aim should be to create a picture, not just a snapshot of the sky. You need to think and plan a little bit more than just a point and shoot approach, because the beauty of sunsets does not lie in the sun or the dramatic sky alone. If you only shoot the sky, its nothing more than a snapshot of the sky. There’s no creativity involved and any newbie with a P&S can do that. To rise above the ordinary, look around the scene and try to include a foreground, a middle ground and a background shape or silhouette which most times can look dramatic against a spectacular glowing backdrop.

The foreground silhouette can be a tree, a person, a boat, a plane, a statue, an animal, a bird, etc . An overhanging branch can help to frame the sun ,and can also fill up a wide expanse of uninteresting sky.

A silhouetted hedge or a row of deck chairs can break the monotony of a boring expanse of ocean. Besides adding an additional point of interest, a foreground silhouette also provides that all important illusion of depth. Remember, a photo is two dimensional and flat, and elements like distant hills, silhouettes in the foreground, and elements in the middle ground can help fool the brains of viewers. When the brain sees two or more overlapping layers like that, it registers the picture as three dimensional, and therefore closer to the real McCoy.

If you want to improve your photography and you think the location is interesting, come back again on another day and try to recompose the picture into something more considered than just a snapshot of clouds lighted by the setting sun. Maxby has been going back again and again to a certain location in Cameron Highlands at dawn in order to get a particular shot that has been in his mind’s eye for so long. Although I’ve seen one of the interim pictures, and I think it is already quite good , he told me he still hasn’t got it yet, and he will keep going back there until he gets the exact image that he has in his mind’s eye.

And when others see the shot, they immediately notice the boring flatness, which you didn’t realize when you snapped-shot it. You thought the picture was great when you shot it, but you didn’t think why it was great then. It was great when you saw it because you had the benefit of being there. The breeze was in your face. The sun was warm on your skin. The colours you saw was nature’s work at its best, not some clumsy attempt at HDR. You could hear the birds singing, and feel the texture of the sand beneath your bare feet. In other words, you were seeing the scene with all five of your god given senses, not just your eyes.

But the viewer of what you thought was your fantastic sunset picture, sitting in front of his PC, doesn’t have the benefit of the other senses that you had when you were actually there shooting the picture, so he sees the image you made exactly as what your camera saw – a flat boring picture, very unlike the fantastic sunsets that no doubt he has himself also seen many times before. When we see something live, and in real time, it’s always our five senses working closely with our brains. In fact our brains have a fantastic filter system. It tells our eyes to skip the uninteresting bits and even if it is in our field of vision, like the proverbial lamp post growing out of the head of our subject, and the telephone wires coming out of their ears, our brain tells us to ignore it, so in real time, we actually see a filtered view.

Not so with pictures. The camera captures everything. When we shoot pictures, we have to learn to override what our brain has filtered, but which our camera will still capture. We may have to change our viewpoint to exclude or to include certain elements. A photographer must be clever enough to realise and see all this, and he must work hard to create an illusion of more than 2 dimensions in his picture. At the highest level, he must know how to spike his image with an emotional charge. And if he succeeds, he will have succeeded in creating a sunset with soul. Then his image will truly be outstanding.

What I’m trying to impress is that, when you shoot sunsets and landscapes, or anything at all, you need to think about all these things. How do you recreate those multi-sensory feelings and experience you had when you shot the sunset, into a two dimensional medium, which is what a picture is. It’s difficult, but doable. These issues are an elementary but necessary step towards making compelling pictures, not only of sunsets, but also of everything else.

Try shooting the sun with lenses of different focal lengths if you have them. A different lens will give a different perspective. A long telephoto for example, will have only about an 8 degrees of view. Explore alternative viewpoints. Look for interesting elements to include into your picture. Be conscious of what to leave out. Take several shots at different exposures to learn the effect of varying the aperture and shutter speed. Remember also that the magic moments of a sunset or sunrise, lasts only a few minutes, and you have to work quickly. It takes only 6 minutes for the sun to travel the distance of its diameter. The magic moments often lasts only a few seconds. Set you camera up on a tripod located at a carefully chosen viewpoint. Set your camera into auto bracketing mode, but take it out of the auto white balance mode. And shoot in RAW because RAW will give you the widest latitude in post processing to recreate the magic that you saw. Noise, clipped highlights and blocked shadows, will be issues that are usually a problem in low key and high contrast shots which most sunset/sunrises are.

Lastly, learn to type “Sunset” into Google, and hit “Search Images”, and you will be presented with thousands of sunset images which you can study in your own learning & discovery journey. Its really a humbling experience, which at worst, can teach you much about what are truly exquisite sunset pictures. But most people wont do that so they will continue to depend on luck and continue to shoot mediocre snapshots to punish their viewers. You’ve got to make a picture, not just shoot one. That’s the difference between a good photographer and an indifferent one.

The following two pictures are examples of what I’m trying to say. They are not perfect pictures but the learning elements are there . In the first picture of sunset over Lake Balkash in Kazakhstan, the silhouette of my friend and the bushes in the foreground, together with the hills in the background, are what gives depth to the picture. If you cover the man, the foreground bushes and hills with paper, you’ll see how boring the picture of the sun alone will become.

The second picture is interesting in the sense that a viewer’s eye can move around the picture to explore and see more elements.

Maxby and I discussed dozens of technical and composition issues like these with participants of the PhotoMalaysia Photography Experience Workshop in KL on 21-22 March, and also in Seam Reap from 6-12th April. We hope to do at least two such Photo Workshops each year with the two days classroom sessions in KL, and a week long photo safari after that, in an exotic location overseas. The next PhotoMalaysia Photography Safari is likely to be held either in Sumatra or Nepal.

Here’s another sample of the many picture possibilities at sunset, shot during the PhotoMalaysia Photography Workshop in Seam Reap. Its a picture of one of the participants of the workshop shooting two kids playing with a skipping rope.

To shoot a silhouette like this, set ISO to around 300 or 400, and your aperture to around f/5.6 or f/8. Its better to shoot in Manual Mode. If you are shooting in JPG (which you shouldn’t) set your White Balance to cloudy to induce a warmer colour temperature. Meter for the bright background. Switch off auto focus & manually focus for the figures that are going to be your silhouette. Look for a depression or lower ground and lie on your tummy in order to point your camera towards the sky to exclude other distracting elements which might clutter your silhouette.

The point I’m making is, the next time you shoot a sunset, try to create a picture instead of simply shooting the sky.

How to place exposures?