This is the 3rd installment of An African Journey by Yusuf Hashim, a co-owner of PhotoSafari.com.my. Yusuf Hashim has been traveling around the world in a 4×4 for more than 12 years. This is one of his episodes of his travels in Africa. It will give an insight on what to expect when you travel in Africa.

These are Wildebeests in the Ngorongoro Crater. Someone said to me that a Wildebeest looks like it was assembled out of spare parts – the front shoulders and legs look like they came from an ox, the rear from an antelope, and the tail and mane came from a horse. Wildebeest bulls are very territorial, and their antics during the breeding season have earned them the name “clowns of the savannah.” The bulls go through all kinds of antics, galloping and bucking around their territories. When neighbouring bulls meet at the edges of their territories they go through a highly ritualized challenge in which they paw the ground, buck, snort and fight. The typical combat position is being on their knees, facing one another, with their foreheads flat on the ground – they knock heads and hit at the base of the horns but seldom injure one another. I was fortunate to be able to shoot this picture against a background of Lake Magadi in the Ngorongoro Crater.

The Wildebeest are the main stars of one of the world’s most amazing sights – the annual migration of hundreds of thousands of plains animals led by the wildebeest and zebras, as they move relentlessly, more than 1800 km in a clockwise direction through the Ngorongoro Crater, into the South Eastern Serengeti, then west towards Lake Victoria, across the grass savannah to the open woodlands, turning north into the Masai Mara, before coming back to the Ngorongoro Crater again, searching for fresh grazing and water as the seasons change. They usually move out of the Ngorongoro Crater around May, when the Serengeti receives its rainfall. During their migration, Wildebeest will swim and cross rivers and lakes in such huge masses that many are injured, are lost or are killed by predators following or ambushing them. You have probably seen this spectacular event on Nat Geo, and I have been blessed to see a small part of it. The rumble made by thousands of hoofs as they race across the plains sounds like thunder.

Apart from animals, there are also interesting human subjects in Africa. Below is pretty Masai Lady, completely at ease with her god given apparatus to feed her young. Actually she looked like she is probably a little too young to have any young yet. Walking around bare breasted is completely natural in many villages in Africa, and driving to remote areas like I did, I have unavoidably shot a few hundred pictures which unfortunately I mustn’t post in case it corrupt the minds of our young members. In this picture I was actually trying to shoot the landscape behind her. Somehow she inadvertently crept into my frame and its a bit tedious to photoshop them out. In accordance with good framing practice, I’ve decided to crop out the landscape behind her.

To balance the unholy pictures, below is an orthodox Christian in his hut in Lalibela, Ethiopia. This is a pretty Ethiopian girl at Gondar castle, at Gondar in Ethiopia, which was formerly a royal town where past Ethiopian Emperors had their castles. Hallie Selassie was the last Emperor of Ethiopia. I consider Ethiopia to be a jewel of Africa which is still raw and unknown to many people because there have been so much problems in Ethiopia that it was avoided by tourists. One of these days I’d like to take a group of PMers to Lalibela for a PhotoSafari. Lalibela is a town 2500 meters above sea level, in the Amhara Region of Northern Ethiopia. It is one of Ethiopia’s holiest cities, second only to Aksum, and it is a centre of pilgrimage for Ethiopian Orthodox Christians of the Tewahedo Church. There are eleven monolithic churches hewn out of solid rock in Lalibela, and they are assembled in four groups. They were all built in the 12th and 13th century during the reign of King Gebre Mesqel Lalibela, and are today protected as a UNESCO World Heritage Site. The picture below is a priest in one of the eleven rock hewn churches in Lalibela.

Below is the Church of St George (Bete Giyorgis built early in the thirteenth century. Hewn out of solid rock, in the shape of a cross, this church is 30 meters high and 25m by 25 m wide. It sits inside a huge hole in solid rock in the ground. According to Ethiopian history, Bete Giyorgis was built by King Gebre Mesqel Lalibela who claimed Saint George and God gave him instructions to build this church. Ethiopians like to think that this church is the Eighth Wonder of the World. King Lalibela had been to Jerusalem in his youth. When old Jerusalem was captured by Muslims under Saladin in 1187, it was said that King Lalibela attempted to build a likeness of Jerusalem at Roha, his capital in Ethiopia. The town was later renamed Lalibela. Many of the town’s features have Biblical names – even the town’s river is known as the River Jordan. Most rural houses of Ethiopians are round and made of mud and cow dung pasted onto a substructure of wood. Where there are suitable rocks, sometimes these are used for the round walls. The roofs are almost always made of straw. Do you know why many native houses in Africa are round?

My friend and fellow traveller Linus, who is half British and half Malaysian, and living in Shanghai, told me that African houses are round because Africans are afraid of ghosts, and ghosts like to hide in corners. So round houses dont have corners, and therefore there are no ghosts.

That Linus is really a smart Alec.

The reality however, is that Ethiopia is haunted by the ghosts of millions of unfortunate Ethiopians who have died either from famine or from civil wars and genocide. The issues confronting Ethiopians during the rule of their Emperors upto 1974 was one of absentee landlords exploiting poor subsistence farmers by taking away half of each farmer’s produce. Bad farming practices on hillslopes have caused soil degradation and erosion which has severely reduced the productivity of the land. In the lowlands, malaria was present, so not much of the lowlands were cultivated. The scrouge of drought and famine was always around and when the weather was unkind millions of Ethiopians would die.

After Selassie was overthrown by the communists in 1974, Ethiopians suffered from civil wars, repression and genocide by their communist government. In 1991, the commuinists were ousted from power by the Ethiopian People’s Revolutionary Democratic Front (EPRDF). From 2008, in an effort to introduce large scale commercial agriculture, create jobs and break out of the cycle of lack of capital and technology, the Ethiopian govt began selling or leasing enormous chunks of fertile land to international companies at give-away rates. By 2013, three million hectares of idle land is expected to have been allotted, equivalent to more than one fifth of the current land under cultivation in Ethiopia. Countries such as Saudi Arabia and India, have started developing land in Ethiopia for growing rice, maize and oil palm. Bore holes and artesian wells are being sunk to insure against drought. The move is part of a wider trend that has seen other African and Asian countries seeking to take advantage of high global demand and good prices, by offering agricultural land to foreign companies, equity funds and governments, particularly those of import-dependent Gulf countries. This has raised fears of food being exported to more prosperous countries while the local population faces its own shortage. If successful, the move will create many jobs but if not, like South Korea in Madagascar, it could be seen as 21st century colonialism. Anyway I wanted to show you some typical houses of Ethiopians in the country side, but since many of us know so little about Ethiopia, I ranted on a bit about this fascinating country that I urge all PM members to put on their radar screens as a country to be visited.

Here’s a typical round house, often called a Rondavel in South Africa. 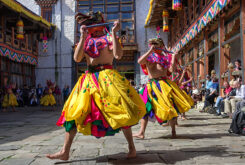