I am glad that the megapixel war is finally over. I think the manufacturers should be looking at dynamic range and tonal quality. My prediction is that in the near future, there will be specialist manufacturers making image sensors just like Intel and AMD and other camera manufacturers just buy these sensors and use it in their cameras not unlike the computer industry.

Some of you may have noticed that camera manufacturers are moving away from the megapixel fights to other features like HD movies. Perhaps one day there will be a coffee maker included.

I was thrown a challenge. Would you like to test the Pentax K-x with 2 kit lens, the 16-55 and 50-200mm? I was supposed to use this camera for 10 days Photo Tour,  PMPE3 in Ho Chi Minh City, Vietnam. All the participants were using higher end equipment than this so call entry level DSLR with kit lens (sounds like kid lens). Most discerning photographers would laugh at such a proposal. Well, I took it as a challenge. My personal philosophy about cameras is that there is no perfect camera, one just need to work within the capabilities and limits of the equipment and work on the image.

Well, when the Pentax K-x arrived, I found that the color of the body was refreshing. It is a lifestyle product rather than a photographic instrument. Immediately the name Bruce came to my mine. See my earlier post.

So here are the adventures of Bruce in Ho Chi Minh City, Vietnam. Before I start, I will talk about some technical capability of Bruce. It has a 12.4 mp, it was rumoured to share the same sensor as the Nikon D300. For more detail specs……read here.

The size is smallish like the Pentax K7, however I find the grip is slightly better than the K7.

Pentax shines in the camera controls department. There is very little need to go into the complicated menu (I believe one would need a PHD to fully make sense of some of the camera menus) for the simplest change in operations. That means you can understand and use the camera very much faster. The K-x is no exception; it has incorporated an “INFO” button for easy navigation through the complicated menu. It allows the photographer to fully concentrate on the picture taking process rather than showing off the prowess of the design engineers. It is truly a Users’ Camera

The shutter is crisps like the Leica M3. The Leica M3 is reputed to have the best camera shutter ever made period. It sounded a bit coarse, but then it is not Leica. The sound is reassuring.

I was given a few sets of lithium batteries without any battery chargers. The first set lasted about 700 to 800 shots. I was really worried that the batteries could not last the whole journey. I read the announcement in PhotoMalaysia that there was a firmware upgrade for the K-x to take care of the battery problem. I downloaded and installed it in the camera. The 2nd set last about 1,700 shots and counting.

The shooting has begun 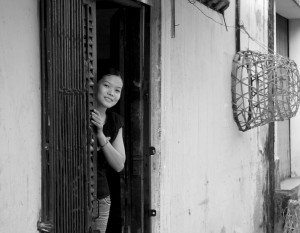 Girl at the lantern making village 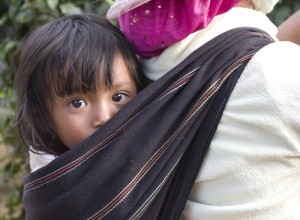 A Lat girl, eyes of insecurity

It is just another day, Long Hai Beach

A kitchen at Long Son, Vietnam

What I find lacking was the combo focal lengths that came with the lens kit. The focal lengths were 16 to 55mm and 50 to 200mm. I would prefer a lens combo of 17-70mm and 50-200mm. The over lapped in focal lengths is ideal in a faster workflow. I had to miss some shots because of this combo. It takes time just switching between the lenses just to get different points of view.

I find the Pentax K-x a very capable camera. The built-in light meter was easier to operate than those cameras that have a little mind of its own. It is an ideal camera for travelling. With its smart colors it is easily a conversational piece. I have not tested the movie capabilities but I think it should be better than most PnS. My personal belief is that still cameras are built for taking still pictures. A high end well known brand camera that was slightly over a couple of month’s old froze up after going through the intensive movie routine for the last couple of months. The Owner was constantly talking about throwing it into the dust bin. Psst! Can you throw it in mine, please?

The colors that come off the camera in jpeg mode is good enough to print. This I think is an added advantage to the casual shooter. This camera is capable of capturing beautiful pictures.

Gorilla in the Park