Ha Giang Province has recently opened up to travelers from abroad. This is a relatively unexplored place on the tourist map. So this is the opportunity to venture into this unspoiled Province before it opens up further.

Ha Giang is a province of northeastern Vietnam. It is located in the far north of the country, and contains Vietnam’s northernmost point. It shares a border with China. Ha Giang is a highly mountainous region, and travel around the province can be difficult. Much of the province is too mountainous for agriculture, leaving much of the land covered by forests. Ha Giang’s central plateau is good for growing plums, peaches, and persimmons, which the province exports. Tea is also grown. Ha Giang is one of the poorest provinces of Vietnam. Traditionally, the vast majority of its economic activity revolved around agriculture and forestry, but in recent years, there have been attempts to establish a manufacturing industry. Infrastructure in Ha Giang has seen improvement, but remains poor – roads, schools, and health services are less developed than in many other parts of Vietnam. February is a good time to visit Ha Giang as the flowers bloom during this spring season. There are numerous flower fields in Ha Giang near Dong Van and its surrounding areas. It offers a great opportunity for photographers to capture these flower fields.

The temperature around this time is generally cool to cold in the evenings. 15h30: arrived Hanoi, check in and shooting around in ancient town 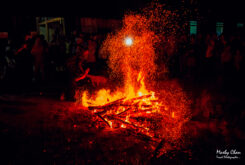 The Mysterious Fire Dance of the Pa Then minority tribe