Over the last 15 years I have been privileged to visit Vietnam more than a dozen times, initially as country leader for the PhotoMalaysia Team on our annual International Crossing Bridges event, and in subsequent years, on private visits mostly hosted by my very good friends Peter Pham and Haipiano Nguyen from Vietnam. The photo above is yours truly, shot in a Hanoi street  by  fellow PhotoMalaysia Admin, Maxby Chan, during yet another PhotoSafari to Vietnam, last week.

The Crossing Bridges Event is an annual getting together of photographers from Vietnam, Indonesia, Singapore, Malaysia, Philippines, Sri Lanka, and Korea. Initially mooted by photographer friends from Malaysia, Singapore, Indonesia and Vietnam, the annual Crossing Bridges event, has grown with more and more countries joining in, providing  participants who join, a valuable  base of photographer  friends in member countries. All member countries take turns to host the Annual Crossing Bridges get together, with each country taking turns each year, to host the event in their respective countries. Malaysia  hosted the event in 2012. Singapore were the hosts for 2013. And the hosts this year, will be Korea.

The date for this year’s Crossing Bridges event will be  from  1-7 November 2014. If you are keen to participate, please send an email to me [email protected], and include your full name, a legible scanned coloured copy of your passport which must have at least 6 months validity from the date of intended travel, your address, email address, HP number and next-of-kin details (name, relationship, email address, HP number, Home address). Participation costs, for the 7 day event is estimated to be only US$750, excluding air fares to Korea. Preference will be given to those PhotoMalaysia members who helped in the organization of the  last CB event when it was  held in Malaysia in 2014. Once your application to be a part of the Malaysian Team is approved, you will be expected to pay the US$750 participating fee, which is non refundable, should you decide to withdraw for any reason whatsoever. Although the fees paid are non refundable, you may  propose a replacement participant, who must be a PhotoMalaysia member, whose acceptance will be subject to PhotoMalaysia Administrators’ approval.

As we’ve just returned from a PhotoSafari to Vietnam’s Ha Giang province last week, and with Vietnam still fresh in my mind, I’d like to share with you, a few photos I’ve shot in Vietnam during numerous visits to that  beautiful country over the last 15 years, including two Crossing Bridges events which  were hosted by the Vietnamese  in previous years..

The photo below is the 1400 years old Chua Tran Quoc Pagoda on Kim Ngu island near the southeastern shore of Hanoi’s Ho Tay or West Lake. When it was built in the 6th Century, it was originally located on the banks of the Red River. It was moved to the present site in the 16th century to save it from collapsing into the river because of erosion. There is a Bodhi tree on the grounds of the Tran Quoc Pagoda, grown from a cutting from the original tree in Bodh Gaya, under which the Buddha sat and achieved enlightenment. The cutting was a gift from India to Vietnam, to mark the visit of Indian President Rajendra Prasad in 1959. I shot this photo in infra Red nearly 10 years ago, using a borrowed DSLR camera permanently converted to shoot in Infra Red. Infra Red photography has many nuances, withe the  strange colours created dependent on the type of permanent IR filter placed over the sensor.

The next photo is the Fire walking ceremony of the Pa Then People of Ha Giang Province in Vietnam. This was shot in 2012. The Pa Then ethnic minority people regard Fire as something sacred. They hold flame dancing ceremonies regularly to pray for bumper crops and good luck, and to express thanks to their gods for good harvests and crops. It’s like no other flame walking ceremonies that you’ve seen. This is a multi-exposure shot created in-camera by my 1Dx, one of the few DSLRs capable of doing this….

The photo below was also shot in 2012. This is a Dao couple lighting a fire to boil water to make tea for us when we visited their modest mud home in Ha Giang. Unlike Sapa which is tourist-shocked and quite unfriendly to  zillions of  tourists visiting Sapa to shoot the ethnic Red and Black Hmongs, the Dais and the Tais, who walk around the town in their exquisite tribal dresses, the Daos of Ha Giag are still visitor friendly, because the area is not so easily accessible, and  because permits are needed in view of the  proximity of the  porous Vietnamese-China border. When we returned to  Ha Giang last week for a PhotoSafari, this was one of the  photos I  printed and gave to this very nice couple.

A Dao couple lighting a fire to boil water to make tea for us.

Below, is another  perspective of this same Dao lady. I like to shoot photos with this kind of mood lighting. I call it my pseudo-chiaroscuro series.

A Dao lady building a fire in the kitchen-cum-living room of their home.

Vietnam is a very looooong country. North to south, the country spans more than 2500 km, from sea level to around 3 to 4 thousand meters above sea level, so the diversity  in climates, landscapes, tribal people, geography, and even cultural practices, are very great. Which is why, despite visiting Vietnam dozens of times over the last 15 years, I’m never tired of Vietnam. While it may be  hot and humid  with temperatures  around 30°C in the south, it could be frosty and even snowing in the mountainous north.  When we were there last week, the temperature was in the  mid to low  twenties in Hanoi, but in Ha Giang and the mountainous North, the temperature hovered around 2 degrees in the mornings, and never  went above 12 to 15°C in the afternoons.  Below is a photo shot in the hilly mid-country region around Dalat, on one foggy morning.

One Foggy Morning in Dalat …..

The photo below was shot at dawn in 2011 at Long Hai Beach in Vietnam. Veteran PhotoSafari participants Kwai Hoong on the left and Qool Mama Roziah Sam on the right are busy shooting Long Hai fishermen hauling in their catch from the night before.

A Bamboo Pipe Smoker exhaling . This was shot nearly 20 years ago during one of my earliest photo outing in Vietnam…

And here’s one of my favourite photos from Vietnam  … a Dao  farmer, relaxing with his bamboo water pipe. I swear  I know what was mixed with the tobacco. Same aroma as you’d get in many of the pubs in Canal street in Amsterdam’s Red Light District. Sometimes you get a little light headed if you  breathe in this type of second hand smoke …

Dao Farmer smoking his Bamboo Pipe in his modest home. The Smoke gave texture and substance to the light rays streaming into the dark home.

I love the juxtaposition in this next  photo. This poster, advertising Samurai beer, was all over  the  cities of Vietnam  .. on giant mono poles, at shopping Malls, on street corners …. and in dark alleys like this one, where a hole in the wall was a tiny Pho Hua Vietnamese Noodle Hawker stall….

And here’s another one in the same series ….

Eating Pho Hua Noodles in a Dark Alley in Hanoi …

The next photo was shot in 2011 at the Nha Lon ancient Temple, at the commune of the Followers of Tran. Lee Van Muu, or more fondly  known as Tran by his followers, started the ancient Nha Lon Temple for the followers of the Tu An Hieu Nghia religion. The followers of the Tu An Hieu Nghia religion who regard Tran with  much reverence, all wear a basic black ba ba costume. They walk bare footed and keep their hair as buns, and many have beautiful long white beards like in this next photo. They consider Nha Lon their sacred common house which they work hard to preserve. This is a unique place to shoot, and several photos I shot at this temple are included in my book, Dep Qua Vietnam. The very friendly people at the House of Tran in Nha Lon, Long Son (10° 27′ 16.99″ N  107° 5′ 45.16″ E), were  very happy when I presented one copy of my book to them, when I revisited  the House of Tran  again in 2012.

The Followers of Tran, at the House of Tran at Nha Lon, Long Son

Praying at an ancient temple in Ho Chi Minh city

At Dai Ninh lake in the Dalat Highlands in 2009, all the PhotoSafari participants were busy shooting a lone  fisherman in the misty lake in the morning. I was on  another  peninsula of the lake and I shot them instead. Below is the photo I shot, which was used  on the cover of my book, Dep Qua Vietnam, which means, You are Beautiful, Vietnam.

One more photo from Long Hai Beach, where Fishermen land  their catch  very early every morning. This one was shot during a photosafari to Vietnam  in 2011.

The Fishermen of Long Hai use very unique circular baskets as small boats to paddle back and forth from shore to ship carrying the catch.

You can purchase the online ebook HERE 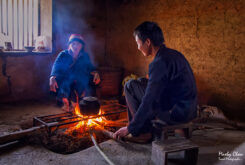