KAESONG CITY
On the third day, we went on a three-hour bus journey to the Southern most city near the DMZ (demilitarized zone). Kaesong used to be the capital of the Koryo dynasty. This city has a population of around 200,000 people. Kaesong Traditional Folk Hotel. This place used to be an ancient village.

We visited some tourist attractions like the King Kongming’s Mausoleum, Koryo Museum and Kaesong Nam Gate. We stayed a night at the Kaesong Traditional Folk Hotel. This hotel used to be an ancient Korean village that dated about 700 years ago. Most of the houses are preserved in its original state with some renovations to provide rooms and modern comforts like an attached bathroom. One has to sleep on tatami-like floor mats. The doors were light wooden lattice with translucent plastic panels (in the olden days, rice paper was used) A typical courtyard inside one of the houses Beautiful maple trees are planted in the courtyard.

Each house has between 6 to 8 rooms with a central courtyard. Staying here is like a step back in time. The whole village is well kept and clean. I would love to come back here in autumn or winter to experience a different feel. The old part of Keasong city is located just outside the Hotel. One can watch the locals go about their daily lives. Inspiration posters are found throughout the whole of DPRK The locals going about their daily routine. When we were there, it was Children’s Day. Children are dressed up to the nines. Their parents would bring them to special activity schools to celebrate with their friends.

Grandpa taking his grandson for a morning stroll. There are no restrictions as to the number of children each family can have. In fact, producing children is encouraged since DPRK is predominantly an agriculture country. Keasong City. Here the public buses run on diesel instead of electric trams. It was a holiday when we were there.

The highlight of this trip was a visit to the demilitarized zone (DMZ), situated on the 38th parallel. It consists of a strip of 2km of no man’s land cutting right across the whole Korean Peninsula. Photosafari’s Yusuf meeting up with an army officer at DMZ Command post on the South Korean side. Beyond that is South Korea. The small curb on the mid way of the single storey stores is the official dividing boundary between DPRK and South Korea. A typical serving for Kaesong cuisine.

DPRK (North Korea) – A Gem Waiting To Be Discovered – Part 1

Adopt a Village – A journey to Laprak, Nepal and Self-help Aid Program 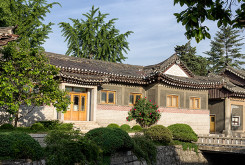 DPRK (North Korea) – A Gem Waiting To Be Discovered – Part 1 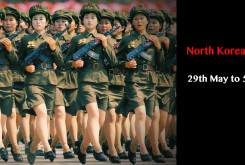 North Korea Photosafari from 29th May to 5th June 2015