The Old Silk Road was collectively an ancient network of trade routes that were central to Cultural Interaction through regions of the Asian continent connecting the West and East from China and India to the Mediterranean Sea. You can witness first-hand the sights, hardships, cultural diversity, and culinary delights that are unparalleled in this world.

We have also chosen a cooler autumn season for our visit to a section along this long Silk Road in Central Asia. We are making a journey from Bishkek (Kyrgyzstan) to Osh and then onwards to Samarkand, Tashkent and Bukhara in Uzbekistan. You will be able to capture some of the awe-inspiring landscapes, people, and culture Kyrgyzstan and Uzbekistan have to offer.

Photosafari has organised six journeys on the Old Silk Road in China and Central Asia on six different occasions.

We have journeyed from Xian to Hotan and Kashgar across the Taklimakan Desert from three different starting and ending points. This year in September 2020, we continued our journey from Bishkek in Kyrgyzstan to Tashkent, Samarkand and Bukhara in Uzbekistan.

Our journey on this Old Silk Road is the whole experience of the journey rather than the destination. Kyrgyzstan and Uzbekistan in Central Asia were part of USSR. USSR has since broken up and all these countries have obtained their independence and are now self-ruled.

Kyrgyz forms the majority of the 5.7 million population. The minorities are Uzbeks and Russians.

Kyrgyz are Muslims; hence, it is easy to find halal food along this journey.

Kyrgyz along the route are traditionally nomads. They move from place to place depending on the seasons and pastures. You will experience first-hand how nomads of Central Asia lives.

Osh is one of the oldest cities along the Old Silk Road with a history of about 3,000 years. It is a city where 250,000 people call home. Osh is a lively place with an outdoor market, Great Silk Road Bazaar. This bazaar is reputed to be the largest in Central Asia.

Osh used to serve as a centre of the Silk Trade Route from Kashgar to Central Asia through the Alay Mountains.

Uzbekistan is a landlocked country with a population of about 32 million people. It has an area of 447,400 sq km. It is bordered by Afghanistan, Turkmenistan, Kyrgyzstan, and Kazakstan. Uzbekistan was part of the USSR. It has since obtained its independence. Majority of the people are Muslims.

Samarkand is one of the oldest inhabited cities in Central Asia. It was one of the main cities along the Silk Road and prospered during this period. The population is estimated to be about 300,000.

Samarkand became an important centre for the export of wine, dried and fresh fruits, cotton, rice, silk, and leather. The city’s industry is now based primarily on agriculture, with cotton ginning, silk spinning and weaving, fruit canning, and the production of wine, clothing, leather and footwear, and tobacco.

The Historic Centre of Bukhara, situated on the Silk Road, is more than two thousand years old. It is one of the best examples of well-preserved Islamic cities of Central Asia of the 10th to 17th centuries, with an urban fabric that has remained largely intact.

Bukhara was long an important economic and cultural center in Central Asia. The ancient Persian city served as a major center of Islamic culture for many centuries and became a major cultural center of the Caliphate in the 8th century. The historical center of Bukhara has been declared as a UNESCO Heritage Site.

Two thousand years ago, Indian spice merchants and Chinese silk-sellers passed through Tashkent’s famous bazaars. This is the meeting point on the Silk Road for those en-route to Europe. Uzbekistan, a predominantly Muslim nation, has a diverse cultural heritage, and Tashkent is cosmopolitan, multi-ethnic city, home to Uzbeks, Kazakhs, descendants of Mongol nomads, Armenians, Tajiks, and even (perhaps) green-eyed, red-haired descendants of Alexander the Great’s armies. Russians settled in the region when it was part of the Soviet Union, and Stalin’s mass relocations brought Koreans, Volga Germans, and Crimean Tatars. After the 1966 earthquake, which levelled most of central Tashkent, a wave of Soviet construction-workers arrived in the city, much of the restored buildings still retains a Soviet flavour.

Good International standard of accommodation are not easy to find along the route from Kyrgyzstan to Uzbekistan. We will be staying in four to six person yurts in Sol Kul Lake only (traditional round tents), family homes, guesthouses on a part of the journey. All yurts are based on twin or triple sharing. There is no single person accommodation available. In the major towns, we will provide hotel accommodation where you can get your own single room if you desire. Please check the schedule of accommodation at various places.

Our main transport will be 22-seater Toyota Coasters or Mercedes Sprinters. We can only take a maximum of 10 participants on this trip so that each participant will have room for their camera equipment.

Not all meals are provided. This is to allow our participants to sample local cuisine of your choice. All foods provided are halal food, as majority of the population along the Old Silk Road are Muslims. The meat of choice is mutton and if you have any problem with this meat, please bring along some canned or packaged food. Restaurant meals along the route are not expensive. Please check the itinerary for the meals you must pay on your own.

September is a good month to visit the Kyrgyzstan and Uzbekistan, the temperature here would be around 13-29 deg C in the lowlands while it will be 0-15 C in the highlands.  After September, it snows heavily and some of the mountain roads will be blocked and one can be stranded for days.

Malaysian, Singaporeans and other nationalities are exempted from applying for a Kyrgyzstan and Uzbekistan visas. We will be able to provide the necessary documents for a tourist visa if required. You will have to pay for the Visa fees.

Here are some of the suggested flights from KUL to Bishkek and Tashkent to KUL.

The best flight out of Tashkent is by Uzbekistan Airlines at 11pm on 1st Oct 2020. It is a direct flight to Kuala Lumpur.

This is an easy to moderate trip. Our chartered bus will bring us up to the point of shooting. You only need to walk short distances to the vantage points. Some of the toilets along the way may not be up to standard. 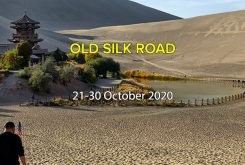