We were at Padang attending the Crossing Bridges 6 from the 26th of Sept. to the 2nd of Oct. 2009. It was an annual event among the photographers from Indonesia, Singapore, Vietnam, Philippines and Malaysia.

On that day we went out early in the morning and had a photo outing at various places around Padang and eventually ended up in Tanah Datar, half way between Padang and Bukit Tinggi. It was a bull race called Pacu Jawi in Indonesian.

After the bull race ended around 4pm we headed up the hill to Bukit Tinggi. On the way we passed a small farming community. Our Bus Driver stopped the bus suddenly and we saw people running out of their houses. People were running and falling. There were waves on the pond by the side of the houses. Those houses we saw survived the earthquake. We did not feel the ground shaking as we were insulated by the bus’s suspension system. 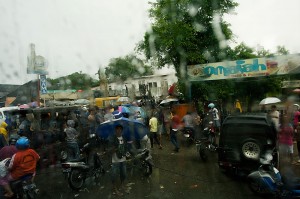 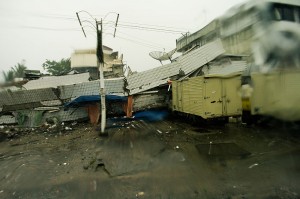 We continued our journey to Bukit Tinggi for dinner. During dinner we were updated about the news from the television broadcast. Apparently some buildings had collapsed. We tried to make our way back to our hotel, Best Western Basko in Padang that night.

The main road linking Bukit Tinggi to Padang was impassable due to some landslides that had taken place. We made a detour through another route. This route took us 5 hours to reach Padang. Around midnight we finally reached Padang. The whole town was blacked out apparently electricity was cut. We saw many buildings had collapsed and people were panicked, walking around aimlessly. Most were dazed trying to absorb what had happened around them or trying to contact their love ones.

We too had a lot of problems calling our wives, parents and friends thru our mobile phones. The mobile networks were jammed with callers. 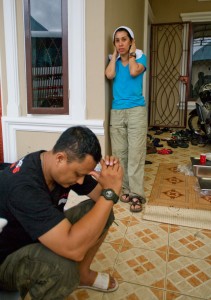 The anxiety among the participants 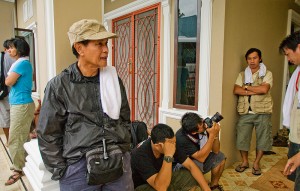 What to d next?

We finally reached our Hotel at midnight. The earthquake was worse that what we had expected. It hit our Hotel too. From initial inspection, the ceiling in the main lobby collapsed and the electricity was cut. That night we had no alternative but to sleep at Dodi’s house (one of our Indonesian Organisers from fotographer.net) A small single storey house in the outskirts of town. It was not affected by the earthquake. So 50 of us had to made do with whatever places that were left to sleep on. Some of us slept in the bus, on the corridors, garage, living and dining rooms. Our hotel in the aftermath Everyone was trying to fill up their fuel tanks

After a light breakfast brought to us by Best Western Basko, we made our way back to the hotel to collect our luggage. On the way to the hotel we noticed more than 10% of the buildings in the town had collapsed and the rest had some form of structural damage. The scene was very sad and disheartening. Even the heavens cried.