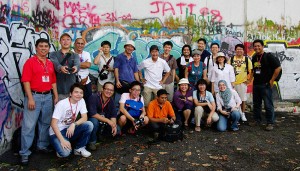 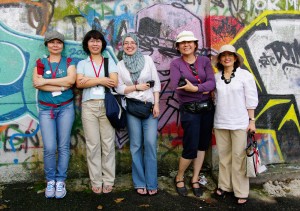 PMPE once again organised a Ricoh Walkabout and Street Shoot to give its members a chance to touch and try out the famed Ricoh GRDlll and the GXR point and shoot cameras. These point and shoot cameras are no ordinary P&S, the price guarantees that. It is a specialised camera for street, documentary and family photos. It has some of the features like prime lens, snap mode, hyperfocus mode which are not found in most P&S cameras.

Futuromics, the Sole Distributor for Ricoh Cameras has kindly consented to allow a few units of its Ricoh cameras  for our members to test drive it in a “street shoot” situation.

The day started at 8am, in McDonalds Restaurant near Masjid Jamek LRT Station. After the usual morning coffee and gear talk, the registration exercise and the walkabout teams were completed. The walkabout started off from McD and then proceeded towards St John’s Institution. We took the path towards the Church at the bottom of the St John’s Hill where we met the Filipino  community gathering around. Some enterprising Filipinos opened open air manicure and hairdressers.

We proceeded to the famous “graffiti wall” where the group photo was taken. After that everyone was tired and we looked for a mamak restaurant for our usual teh tarik session and more gear talks.

It was a refreshing outing and a good chance to loose those extra kgs. accumulated over the week. 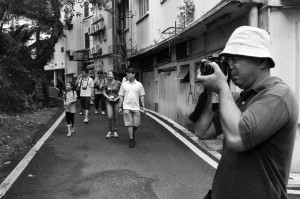