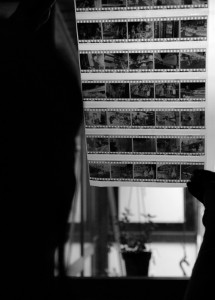 A B&W film developing course 101 was conducted on the 24th of October 2009. Ten participants and a few other photographers came for breakfast and a morning walk around the China Town route.

Participants were given one roll of film each (Ilford Delta 400). There were some last minute instructions on how to load the film camera (most have forgotten how to do it) and set the ISO setting on their film cameras and how to operate the in-built light meter.

After the initial briefing, the group set off on the China Town route starting from McD to Jalan Pudu, Indian Temple, Tong Shin Hospital, China Town and finished a “Kuan Ti Temple”.

You need to kiss the camera

The participants took an early lunch break at Pelita Restaurant in SS2. After lunch the participants assembled at Photo Media in SS2 for part 2 of the course – B&W film developing.

A half an hour talk on the overview of B&W films, types of developers, the temperature conversion chart, how to load the film onto the plastic reels and how to mix the chemicals.

The film loading part went off smoothly. All the participants managed to load their films properly.

Next was the instruction on how to pour in the developer, the agitation techniques and the workflow from developer > stop bath > fixer > washing > wetting > drying

Everyone was excited when they first saw their developed film emerging from the reels. The wet films were hung in the drying cabinet.

Next was the cutting of the films and putting it in the film sleeves. Sarip and Liew came to help out in the scanning of the negatives.

Overall it was a very satisfying day for most of the participants.