It has been my fascination on what are the most expensive cameras that money can buy. This is the list that I found at Bornrich website that summarises the list of most expensive cameras in the world.  For those avid camera collectors out there, these camera models may offer a hedge against inflation. This list is based from both antique and rare cameras to present production models. This list also includes cine cameras. Hope that you will have a nice time reading this list The 84-year-old Leica 0-Series camera earlier fetched $551,151 in an auction, being 100 times the cost of any contemporary digital camera! The portable black camera becomes the world’s most expensive small camera ever sold at an auction. An unidentified European collector took away the rare 1923 product. Leica happened to be the seventh of a series made in Germany to analyze the market for portable cameras, designed for export to New York. However, this camera again went under the hammer at WestLicht camera auction and fetched a whopping $1.9 million.

Before the famous catchword “say cheese” was coined, a Giroux “Daguerreotype,” the world’s first commercially-produced camera was invented. The 170-year-old camera (previously undocumented) remained in private ownership in northern Germany for generations and goes up for auction at WestLicht Auctions in Vienna. Believed to be the world’s oldest and most expensive camera, the wooden sliding-box camera was made in Paris in September 1830 by Alphonse Giroux. The camera was signed by Jacques Mande Daguerre, which verifies the device’s authenticity and is accompanied by a manual written in German. Valued at a starting price of 200,000 euros, the camera is expected to fetch somewhere between 500,000 to 700,000 euros. There’s no doubt that the passionate collectors will be drawn to the lore and legacy of the camera, and for the rest, it’s such an opportunity to cherish the gadget that fathered the proverb “a picture is worth a thousand words.” 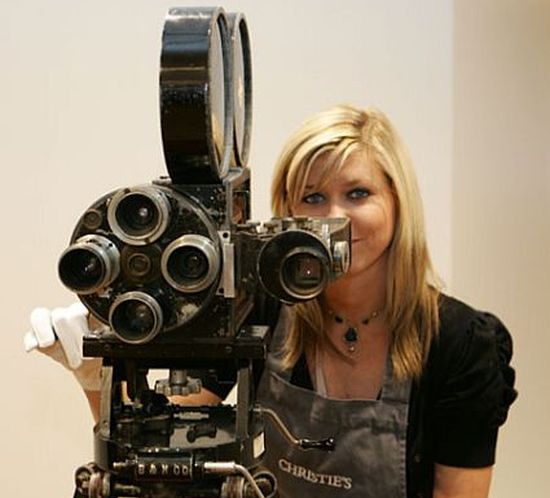 Cameras hold a special meaning for every sort of photographer, from the amateur to the professional as it allows capturing moments closest to one’s heart. But if you prefer to shoot your environment in motion, than the $118K Phantom Gold camera used to shoot Shark Week’s slow motion vivid videos is sure going to be the apple of your eyes, for its multiple function and robustness. Though only 150 of this camera is out there for use, every user seems to be raving about its capability to shoot ultra high quality of images, and the 35mm depth which is still a rarity in the finer variety of cameras. No wonder shark week’s videos are vividly alive and of such high quality! One of the reasons for that can be attributed to the capacity of the lens, taking inputs at the rate of 1000 fps (frames per second) at a resolution of 1920 x 1080, and its ultra-high shutter speed which takes 1/500,000 of a second to capture images. Also, if you need slow motion video capturing, then the frame rate controls allow you to greater control of duration, speed and time of the captures. Other technical wonders of this camera include manipulation of videos in terms of brightness, contrast, Gamma, saturation, hue, white balance, sensitivity and image flipping. For storing what you have captured, you have the additional storage device which fits snuggly on the camera, and has storage capacities of 8, 16 & 32 GB depending upon your choice. So whether you’re are shooting a commercial, a movie or even short films, the Phantom Gold is capable of catering to every possible need which multi-faceted working capabilities. When it comes to high definition video recording, few companies have rivaled Phantom cameras in that department. Phantom v1610 is yet another milestone in non-scientific cameras, it can capture videos at speeds of up to 1 million frames per second (FPS), practically capturing everything that is there to record. Not to be perplexed by the high number, as this high speed of capturing is achievable if the resolution of the video is reduced to 128 x 16, and the optional FAST shooting feature is used because for smaller resolutions, a higher speed can be achieved making it perfect for capturing minutest of details. However, if the user doesn’t want to use such a high speed, then he/she is perfectly welcome to shoot in the range of 600,000 FPS in low resolution. As for regular shooting capabilities, a rate of 16,000 FPS is achievable at a fairly decent resolution of 1280 x 800 pixels. Also included in the camera is the CMOS 35.8 x 22.4 mm sensor that can record at 16 giga-pixels per second, which can be stored with the help of the optional 24GB, 48GB or 96GB of RAM, and if that too isn’t enough, could try Phantom CineMag storage system that can store up to 512 GB of videos which make downloading and storage faster. Also, if you are looking to share your contents on a network, there is a 10GB Ethernet port on the back panel along with other features like the USB Port, remote control, SMPTE & IRIG time code, strobe outputs and also the Frame synchronizer with external or internal clock.

Sony needs no introduction in world of gadgets and gizmos, as the name has instant recall associated with sophisticated technology and up market designs to match them. Other than PCs, audio systems and television sets, Sony has been equally popular, in the recent past, for the cameras they make, especially for their high-definition recording and photographic abilities. One such camera is the F65 CineAlta 4K video camera, which even cinematographers might find too hot to handle, with its flexibilities and rich quality of recording. The F65 is so loaded in features, we decided to skip a few and let you some of the main ones including the ‘4K’ video recording capabilities. This camera is well capable of recording video which is 4 times in intensity when compared to full high-definition (HD) videos. The intensity of recording is 4096 x 2160, as compared to full HD which is 1920 x 1080 and this happens in a 20.4 megapixel resolution which could mean a high clarity of video recorded. This quality enables the camera to store its inputs on a 1 TB SR Memory Card at 24 FPS, which means that it’s near perfection if used on a slow motion mode. Should the camera man not be present at sight of shooting, there is not going to be much hindrance as the wireless capabilities allow it to be smoothly controlled through your iPad or any other tablet PC. The price tag of the device is $65,000 a piece and shall start to be showcased in retail channels from January 2012 onward. 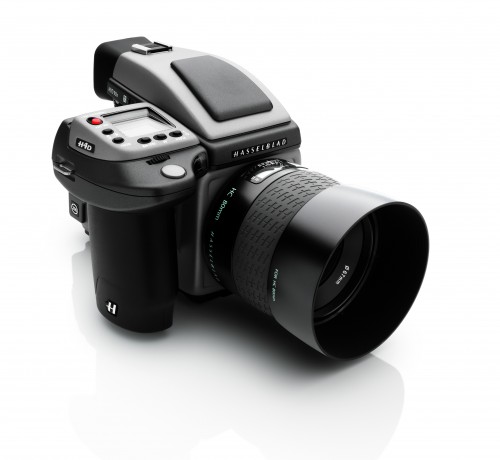 Hasselblad has been exploring the new in creating ultra-high resolution capture and as promised last year, the Copenhagen-based medium-format camera maker has now launched H4D-200MS, the amazing 200-megapixel camera, at the Photokina Imaging show in Cologne, Germany. The 200MP camera uses a 50-megapixel sensor mounted onto the multi-shot frame, and combines six shots to create the high resolution. The H4D-200MS includes all the functionality of the H4D-50 and H4D-50MS, including True Focus, Ultra Focus, digital lens correction and others. The high-end camera offers three distinct capture modes…

At full 200 megapixels, each image will be about 600MB in size, so better get a big memory card in case you plan to buy one. Bringing unprecedented detail and resolution to your still life and studio photography, the H4D-200MS is available now for €32,000 (about $45,000). If you own a H4D-50MS already, you can opt for the €7,000 upgrade by sending the camera to the factory in Copenhagen, Denmark.

Capturing all those precious moments of your life is sure a luxury and Canon’s diamond-encrusted camera will make it even more luxurious! Canon has introduced special edition diamond camera, Diamond IXUS to mark the 10th birthday of their IXUS range. The Diamond IXUS is studded with 380 diamonds and it sports a blingy price tag of around £27,000. The dazzling snappers will be auctioned off through eBay and the proceeds will will go to Red Cross charity funds. 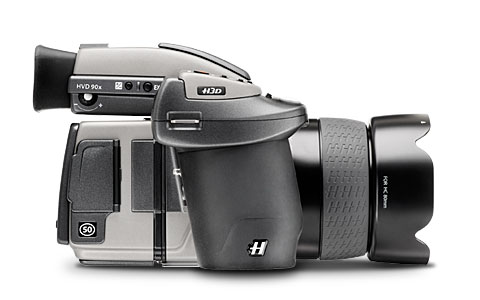 If you drool over the diamond and gold cameras, then hold your breath, we have got a bigger surprise the Seitz’s 160 megapixel camera! The behemoth camera creates a 6×17 digital image with 160 million pixels. The device is a computer in itself with most advanced characteristics in processing, disk space and memory. And, contrary to its hi-fi specs, the camera features a user-friendly interface and has a 640×480 color touchscreen display on its backside. The awesome snapper comes with 16mb of flash memory for a price of $36,266 for the mobile version and $33,715 for the studio version. And, this most advanced camera will be available not earlier than 2007. Leica M9-P which was created in special avatars like the red leather, black ostrich leather, titanium, and silver chrome, now gets created in white for the land of the rising sun, Japan. Coinciding with their store opening in the city of Tokyo, only 50 of these special aluminum and white leather bodied will be seen in the market. Though there is the $31,695 price tag attached to it, collectors might as well splurge on the camera, not to take pictures, but keep it memorabilia or even look to resale it at higher value. It is also perhaps the reason why, there hasn’t been too many changes to it, except for the fabrication alone. Leica seems prefer the old world charm more. Other than just being a high-end collectible imagery device, the most critical photographer will testify to the crystal clear quality of the photographs taken from a Leica. It’s no wonder that M9-P special edition carries with a 50mm f/0.95 lens, which will enable the photographer to take 18 Megapixel full frame photographs. For those looking for a critical angle to its quality, the picture depth is rather thin, which might be a concerning factor for some, but in general would still appear to be of top notch quality. In terms of fabrication, the body is created with aluminum, and encased in crafted white leather, something which has been carried forward for the carrying strap on the side. The smooth finishing with a tender matte texturing gives the device a special sophisticated appeal indeed. So much, we fear that the buyer may not ever click a picture with it, but instead store it as a historical memorabilia! But deciding whether it’s worth the price, and a trip to Japan especially to buy it, is something the Leica fans would have to decide for themselves.

Celebrating the 60th anniversary of the Peoples’ Republic of China, Leica has introduced a limited edition 24-carat gold-plated camera. Limited to just 60 units, each hallmarked with a year between 1949 and 2009, the Golden Camera is encased in red calfskin, bears an inscription of Mao Zedong’s favorite slogan and includes the Leica Summilux-M 50mm f/1.4 Gold lens. Priced at $30,000, the Gold Camera comes with a wooden box to store the equipment and is sold exclusively in mainland China.

Credits: images taken off the internet.

The largest Camera Collection in the World belongs Dilish Parekh, a Resident of Mumbai.