This is the 10th instalment of An African Journey by Yusuf Hashim, a co owner of PhotoSafari.com.my. Yusuf Hashim has been traveling around the world in a 4×4 for more than 12 years. This is one of the episodes of his travels in Africa. It will give an insight on what to expect when you travel in Africa.

Lake Magadi or Lake Makat in the Masai language, is the largest lake in the Ngorongoro Crater of Tanzania. Makat means salt. The water is alkaline because of volcanic ash in the Ngorongoro crater. A small stream, the Munge, flows into the lake. During the rainy season, the water is relatively fresh, so it is visited by thousands upon thousands of Pink Flamingos, which feeds in the lake. Animals in the Ngorongoro crater – Zebras, wildebeest, impalas, ostriches, warthogs etc. also visit this lake for water, so the lake shore is a killing zone for Ngorongoro predators such as Lions, Hyenas, and jackals.
The Flamingos come over here to feed, although they nest in their thousands outside the crater at the nearby Lake Natron. There is another Lake Magadi in Kenya which is also home to an even larger number of Flamingos.

Stay tuned for the 11th part of this series 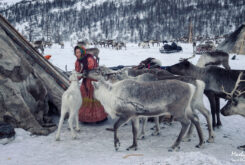