A jockey with his cowboy hat riding the bulls

Pacu Jawi or Bull Race used to be held after the harvesting season. Farmers would take their bulls or cows to this festival to sell. In order to demonstrate that their bulls or cows were strong, they hired jockeys to race the bulls over a flooded rice field. This practice was forgotten until it was revived a few year ago. We were among some of the earliest photographers to witness such an event. Since then, Photosafari has organised yearly trips to Padang for local and foreign photographers to photograph this exciting event. Here are some photos from this event shot from different perspectives. Assistants helped to rein the 2 bulls together. A bamboo harness was placed on each bull. At one end of the harness was a flat timber plate for the jockeys to stand on. Once the bulls were in position, the ride starts. Very often more than one set of bulls were racing. One has to watch out for the bulls at the finishing line. Sometimes it gets too close for comfort. A spectator sprinted out of the way. The photographer also ran off right after this. Some bulls were slow, in order for the jockey to encourage a bull to ran faster, he bit the tail of the bull A jockey covered with mud after the ride. A farmer walked his bull home after the race. 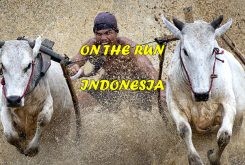 On the Run, Indonesia 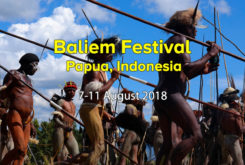