We are back from an exciting photosafari trip to Ethiopia. The whole journey was an eye opening experience. We made a side trip to Lalibela while waiting for the rest of the participants to arrive. For the main trip to OMO Valley and Bale Mountains, we hired 5 4×4 vehicles to take us through the rough terrain. Three participants were allocated to each vehicle.There are so many stories to tell from this trip. I will start off by showing some landscape photos from Bale Mountain National Park.

The Bale Mountains (also known as the Urgoma Mountains) are a range of mountains in the Oromia Region of southeast Ethiopia, south of the Awash River. They include Tullu Demtu, the second-highest mountain in Ethiopia (4377 meters), and Mount Batu (4307 meters). The Weyib River, a tributary of the Jubba River, rises in these mountains east of Goba. The Bale Mountains National Park covers 2,200 square kilometers of these mountains. The main attractions of the park are the wild alpine scenery, and the relative ease with which you can see many birds and mammals that are unique to Ethiopia.
The Bale Mountains are home to many of Ethiopia’s endemic animals, notably the Ethiopian Wolf, (Canis simensis), found on the Sanetti Plateau. The park also contains the Harenna Forest, situated to the south of the mountains which is a largely unexplored area thought to contain many undiscovered species of reptile as well as lion, leopard and various types of antelope. Besides wildlife the National Park offers exceptional trekking opportunities from the park headquarters at Dinsho. (Dodola is also a useful base for exploring these mountains.)
The largest group of Ethiopian Wolves is found here. Other characteristic large mammals are the mountain nyala, Menelik’s bushbuck, warthog, and bohor reedbuck.
The Juniper-Hagenia forests lie between 2,500 and 3,300 m and are mostly found on the northern slopes. An unusual plant of the Dinsho area is the white-flowered Abyssinian rose. The alpine moorland of the Saneti Plateau is covered in heath-like vegetation broken by heather plants and stands of giant lobelia which grow up to 6 m high. One of the most common and distinctive plants throughout the Bale region is the red-hot poker, an aloe which can be identified by its orange spear-shaped flowers…..source – wikipedia A lone horse grazing on the plains The plains in the morning Little vegetation grow on the plains It is surrounded by rift valley. Some of the many small streams that crisscross the terrain. On the way up the mountain On the way up Bale mountains 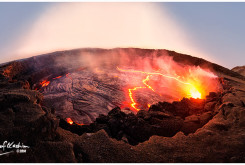 Ethiopia – On Board with Maxby Chan 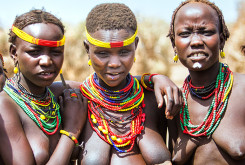 Ethiopia – the Cradle of Life