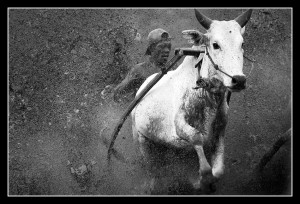 The Bull Run or Pacu Jawi was organized specially for the participants of Crossing Bridges 6. It was the highlight of the Crossing Bridges outing. Sadly 2 hours after this event, a strong earthquake 7.9 on the richter scale rocked Padang causing very extensive damage to the Town and its surrounding villages. 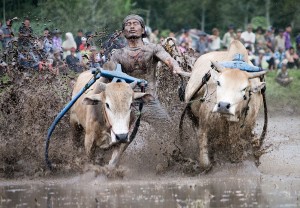 The Bull Run is usually organized after the rice is harvested. It is the time for rejoice and celebration for the rice farming folks in this farming community. The Bull Run is not a race of sorts. There is a carnival atmosphere all round. There is lots of entertainment for folks of all ages. There are Ferris wheels and merry go-round rides for kids, shopping for the women folk and a great meeting to socialise. This celebration usually last over a period of 3 days. Preparing the bulls for the run

The Bull Run is a time for buying and selling bulls. Bulls here are used to plough the land and to carry heavy loads. Buyers would gather at these Bull Run to assess the potential usefulness or strength of the bulls. The bulls run in pairs and a rider is usually hired to ride the bulls. A harness called a “york” is placed on top of the Bull’s hump. The rider gathers the 2 yorks of the 2 bulls and steps on it. He uses the bull’s tails to steer the bulls. In order to encourage the bull to run faster, the rider often bites the tails of the bull that is running slower than the other. 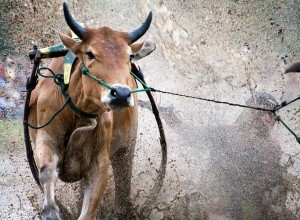 Bull Run on a muddy field

After the run the bulls were led to another paddock where the owners would clean up the bulls and negotiate with potential buyers. 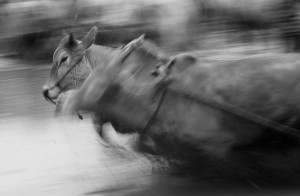